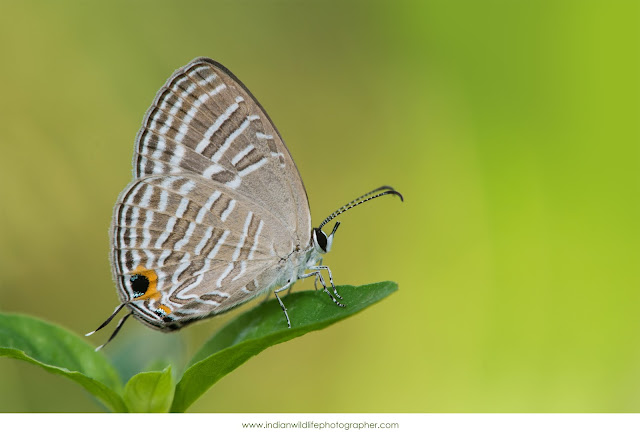 All season small butterfly in kerala, this is founded in Ponkunnam, Kerala, India,
Name Common Cerulean (Jamides celeno) is a small butterfly found in Southeast Asia belonging to the Lycaenids or Blues family. Like many tropical butterflies, this species shows seasonal polyphenism, with the appearance differing between adults according to the season. 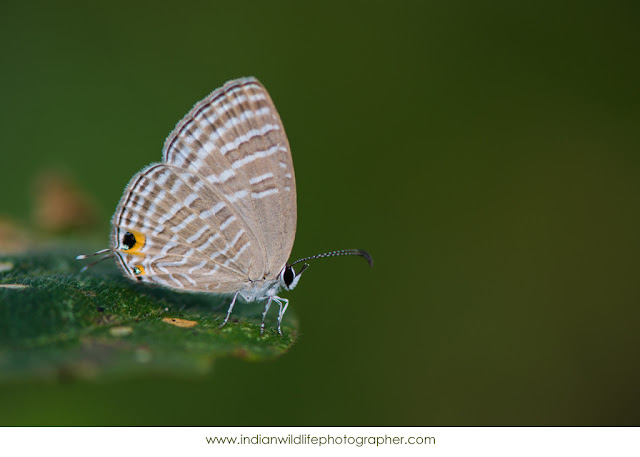 Male upperside has the ground colour pale bluish white. The forewing has the terminal margin narrowly edged with black that broadens very slightly towards the apex of the wing; the cilia are brownish black.

The hindwing is uniformly coloured, except for an anticiliary black line faintly edged on the inner side by a white line within which and touching it is a row of black spots, the anterior spots very faint, the spot in interspace 2 large and well-defined, two geminate spots in interspace 1 and a very small black lunular dot in interspace 1a; cilia brown, white at the base in the interspaces. In specimens obtained in the height of the dry season the black edging to the termen of the fore wing is much reduced and the subterminal series of black spots in the hind wing is altogether missing.

The underside is greyish brown. The forewing has seven transverse white bands as follows:—two short bands one each side of the discocellulars, the inner one continued downwards to vein 1 and both represented at the costa by two detached spots; two parallel discal bands, the inner one broken at and the outer one terminating on vein 3; two parallel subterminal bands, the outer one slightly lunular; lastly, a more slender terminal band followed by an anticiliary slender black line; the dorsal margin narrowly white; cilia brownish black, their bases white in the interspaces. Hind wing: crossed by nine white bands or lines as follows :—three between base of wing and apex of cell, those posteriorly in interspace 1 or on vein 1 abruptly turn upwards and terminate on the dorsum ; the first band beyond the cell extends from vein 6 to vein 2, then curves upwards in interspace 1; the next extends straight from just below the costa to vein 4, thus overlapping the previous band for a short distance ; the next or postdiscal band runs between the costa and vein 3, the subterminal two also between the costa and vein 3 but the inner one of the two bands is extended down to interspace 1 and there curves upwards towards the dorsum ; both the subterminal bands are more or less lunular; in the interspace below vein 2 is a large subterminal black spot speckled with metallic blue scales and bordered inwardly by ochraceous orange; there are also in interspaces la and 1 two black dots inwardly edged by a short white streak set in an ochraceous background ; lastly, there is a complete terminal white line followed by a black anticiliary line and a filamentous short black white-tipped tail at apex of vein 2 ; cilia as on the upperside. Antennae brownish black, the shafts as usual tinged with white; head, thorax and abdomen pale brown, bluish on thorax and base of abdomen; beneath : the palpi, thorax and abdomen white, the third joint of the palpi and the second joint anteriorly black.

The female has the upperside ground-colour paler than in the male, often quite white; terminal black edging to fore wing very much broader, broadest at apex, its margin there diffuse. Hind wing: differs from that of the male as follows:—costal margin broadly dusky black; a postdiscal transverse series of dusky-black connected lunules often more or less obsolescent; this is followed by a series of black spots each set in a background of the white ground-colour; an anticiliary slender black line as in the male. The underside ground-colour is paler than in the male, the markings however are identical. Antenna, head, thorax and abdomen as in the male. 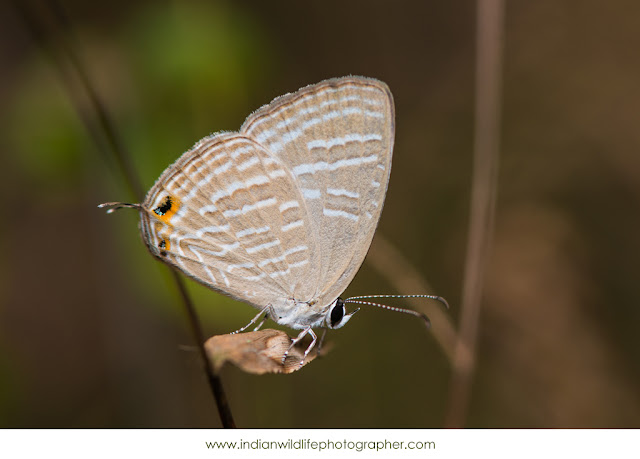 Closely resembles the males and females of the dry-season brood; the markings are similar but the ground-colour is generally darker both on the upper and undersides, while the black edging to the fore wing and the black postdiscal and terminal markings to the hind wing on the upperside are broader and more clearly defined. Antennae, head, thorax and abdomen as in the dry-season brood. text copyright: wikipedia 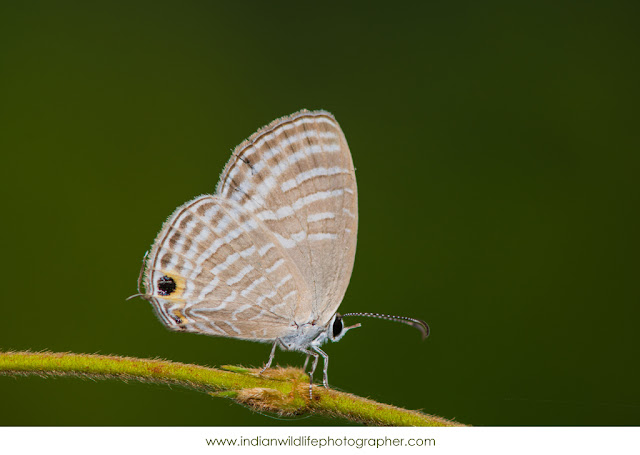