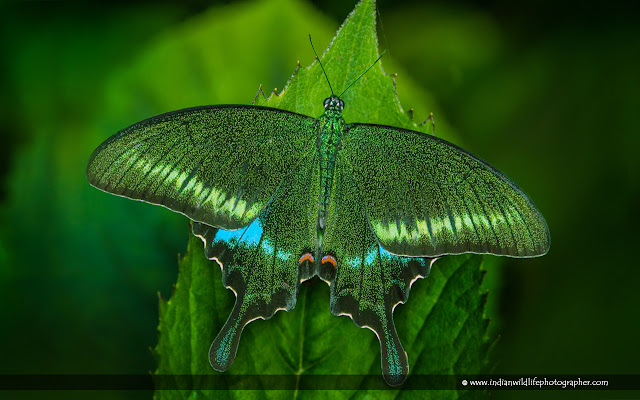 This butterfly Founded In Paruthumpara Para River Side, Name Paris Peacock (Papilio paris) is a species of swallowtail butterfly found in the Indian Subcontinent and Southeast Asia.

Upperwings are black and irrorated with dark green scales, which on the outer portion of the forewing coalesce and form an incomplete postdiscal narrow band which is straighter than the similar subterminal band on the forewing of Papilio polyctor.

On the hindwing, the irroration of dark green scales does not extend to the costal margin and is interrupted posteriorly by a broad postdiscal area, on both sides of which the green scales coalesce to form narrow diffuse bands; a conspicuous upper discal shining blue patch occupies the base of interspace 4 and outer portions of interspaces 5 and 6; this patch is variable in size, and in many specimens extends narrowly below and above the interspaces 3 and 7, respectively, its outer margin is uneven, its inner margin evenly arched; a prominent claret-red largely black-centred ocellus at the tornal angle, its inner margin with a transverse short violet-blue superposed line; in many specimens an obscure claret-red subterminal lunule in interspace 7.

Underside opaque black; bases of both fore and hind wings, up to basal half of cell in fore and up to apex of cell in hind wing, with an irroration of yellowish scales; also present more obscurely on the subterminal area in both wings. Fore wing with a very broad elongate triangular pale area that does not extend to the termen, formed of inter-nervular broad very pale ochraceous-white streaks, short near the tornus, gradually longer up to the costa. Hind wing: a prominent subterminal series of ochraceous-red lunules traversed by short violet-blue lines; in interspaces 1,2 and sometimes in 3, these lunules are formed into more or less complete largely black centred ocelli by the addition of an admarginal portion of the red ring. Cilia conspicuously white in the interspaces. Antennae, head, thorax and abdomen black, the latter three sprinkled with green scales above.
Female. Similar to the male but somewhat paler and duller. Upperside of the forewing has the green postdiscal band shorter and more incomplete than in the male. Hindwing with the upper discal patch smaller, often green and not blue, the red subterminal lunule in interspace 7 is always present and more prominent than in the male.

Underside of wings similar to that in the male, but the tornal and subtornal markings generally formed into more or less complete ocelli. Wingspan: 106–132 mm

The Himalayas from Kumaon to Sikkim, Nepal and Bhutan; the hills of Assam, Burma and Tenasserim, extending to Thailand and the Malay Peninsula. A common insect in Sikkim, where it is found from the Teraiup to 5,000 feet. It is rare in Burma and Tenasserim. It also occurs in some parts of the Western Ghats, such as the Chikmaglure b.b.hill ranges. wiki/Papilio_paris
Posted by Unknown at 9:39 PM